You know how your favorite cookie (or whatever) that Grandma used to make just doesn’t taste the same when you make it? You’ve tried and tried… followed her recipe to the T…. and it still isn’t ‘quite’ the same.  Yeah… it’s because Gramma lies!

You’re skeptical, I can tell…. but I have proof!  See the recipe below?  The typed portion is the recipe that Grandma told me…. I made it several times… but it was just never right.  The handwritten part was added after I badgered Grandma until she gave me the real recipe.  That’s her handwriting……. sneaky, sneaky Gramma.  (I hope I’m just like her when I get older.)

I didn’t realize until Grandma passed away that she used a different sized pan for these cookies.  I’d been using a regular 13x9in baking pan.  After she passed away Grandpa let me have a bunch of her baking supplies…. and that’s when I realized that she’d been using an AirBake jelly-roll pan.  It’s bigger… not by a huge amount, but it does make a difference in the crust layer.  It’s not so bad for the chocolate and caramel layers, but it’s noticeable in the crust layer.  I’d vote that you just get a jelly roll pan… bonus, you can make jelly rolls now! I think it makes enough of a difference. (I use one like this.)

When I went gluten free I really missed Grandma’s Turtle Cookies.  It wasn’t until I discovered King Arthur’s Measure for Measure and Cup4Cup’s gluten free flours that I had any clue how to de-gluten my favorite cookies.  I’ve used both GF flours and had great results both times. 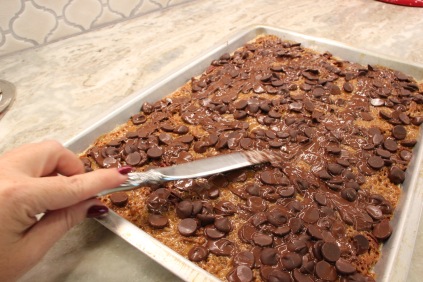 In a food processor, combine GF flour, butter and brown sugar. Process mixture until fine, sand-like particles form.  Do not over process. Pat crust into an un-greased jelly roll pan (I use one like this). Sprinkle pecans evenly over crust layer.

Prepare caramel layer: Combine caramels, evaporated milk and butter in a small sauce pan.  Allow caramel come to a low boil, being sure that all caramels are melted and smooth.  Pour caramel over pecans.

Bake at 350° for 18-22 minutes or until caramel is bubbly and crust is golden brown.

Allow to cool.  (Seriously… leave them alone.  I know this is torture, but leave ’em alone until they cool…. this may take a few hours.  Putting them in the fridge to cool makes the chocolate harden odd.  Just leave em alone.. it’s worth the wait.)