I finally broke into my Wildtree new rep pack of goodies.  I wasn’t sure if I was supposed to try the sample packets or if I should save them for my hostesses.  My

up-line leader said I should try out the samples and have fun.   Gee…. this Wildtree work is SO hard.  🙂

Mom was the one who suggested that I give Wildtree a try.  She was just as excited as I was by all the great all natural products.  So of course I called Mom as I broke into my new Wildtree products and started to experiment in the kitchen.

We started out by opening up the Best of Wildtree 8 Pack and sniffing.  I was impressed by how full all the jars were.  Most were filled right up to the rim.  One or two were slightly less full… below the neck of the jar, but still above the label.  Oh, and they all smelled so good.

I was craving burgers, so we decided to start with the Rancher’s Steak Rub. 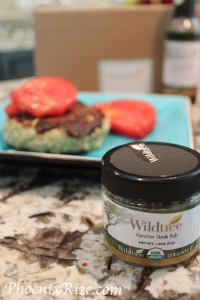 Combine turkey, cheese, egg and spices.  Divide turkey mix into three patties.  Press one Cheddar Cheese cube into the center of each patty and cover.

Heat the oil in a cast iron pan (or whatever you use, but I really like using cast iron.)  Cover and cook the burgers until they are completely done.

Mega yum!  I think Mom was  a bit nervous that we wouldn’t like ’em, (Here we’ve gotten ourselves into this new business, right?) but they were great.  There was a ton of flavor in that little teaspoon of seasoning.  Enthusiasm renewed!  I am so happy that I joined Wildtree!

We’re celebrating our 11th wedding anniversary today! Eleven years of travel and adventures together. This year we’re celebrating at home, but hopefully we’ll be able to hit the road soon for more travel and adventures! 📸: @jamesrubiophoto
Mmmmmm.... 🤤 Epikurean Burger and fries from @epikburger #glutenfree #glutenfreeinflorida #epikburger #epikureanburger
Not being able to celebrate your birthday with friends really stinks..... guess I’ll just have to eat this whole cake my self 😉 Thanks @cremedelacocoa for making this amazing gluten & egg free birthday cake! #quarantinebirthday2020 #goawaycovid19 #birthdaycake #cremedelacocoa #glutenfree #eggfree
Sunrise #sunrise