Day four!  We’ve spent so long planning this trip, it hardly seems like we could already be up to day four!  Brian are I are having a wonderful time seeing parts of the country that we’ve never seen before.  We continue to be amazed by how different the geography is in each state.  Texas was prettier than I would have ever expected.

This morning we had planned to go to the Palo Duro Canyon State Park (see, STATE park… makes all the difference!)  The forecast was calling for rain all day, but I really had my heart set on seeing the canyon.  The day before had been so bright/overcast that photos had been difficult.  I figured the storm clouds would at

least give me a break in that department.  As it turned out, we managed to beat the storm almost the entire day.  It caught up with us for a bit in New Mexico, but by then we were in the car and didn’t really care.

I’m so glad we decided to visit the canyon.  It was beautiful!  I’ve been to the Grand Canyon and I would have to say that I enjoyed this much more.  I was on an airplane/bus tour from Las Vegas, so I didn’t get to see much beyond the rim, and it was pretty and all….. but I dunno…. I’ve also visited the Waimea Canyon in Kauai and it was cool too….. but I just really enjoyed the Palo Duro Canyon more.  Maybe it was because Brian and I got to go down into the Palo Duro Canyon 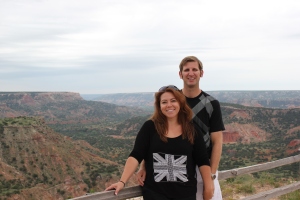 and explore more.  There are all these walking trails and picnic areas.  We really had a wonderful time.  If you are ever in the area, this is a “must-see.”

I wish we would have had more time to walk the trails, but the clouds were pressing in and the temperature kept dropping (76° in Texas!).  The park ranger had warned us on our way in to head back if it started to rain because where we were headed was beyond two roads that often flooded.  We also had a 6 hour drive to reach Albuquerque, NM.

We had a couple of Route 66 stops semi-planned along the way to Albuquerque to break up the long drive.

Our first stop was at the Cadillac Ranch.  I guess I never really read up on it too much…. I’d seen photos and heard about it, but never bothered to research it.  I just had it in my head that it was some kind of weird “art” along Route 66.  Which is mostly true…. but less “art” and more graffiti/trash heap.  I hadn’t realized that people were encouraged to vandalize/deface the Cadillacs even more than they already were….. I have to say, I was totally disappointed.  It was just a bunch 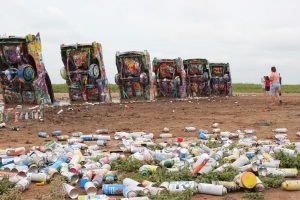 of old cars with their noses buried in a mud pit that had been spray painted over so many times that the paint had bubbled and peeled.  Piles of discarded spray paint cans littered the ground and the stink of dirt and paint filled the air.  It was sad.  Just really, really sad.

I napped for a while in the car and I think we missed a couple of the other Route 66 stops, but honestly, after the Cadillac Ranch I think we were both feeling less interested in Route 66 attractions.  By staying on the main highway we could do 75mph and Albuquerque was calling.

We found the Historic District of Albuquerque and had dinner at the Church Street Cafe.  It had gotten really good reviews on Google for authentic mexican cuisine.  Maybe I don’t like authentic Mexican food?  I don’t know, I was a bit disappointed.  The place was really cute, but the staff was very disinterested and inattentive.  The food was much spicier than I enjoyed and very thin on the protein.  Brian enjoyed his tacos though.

After dinner we roamed around Old Town and checked out the art galleries and other little shops.  The store owners/artists were vary chatty and friendly.  Brian

and I got caught up by one artist in particular and spent nearly 45 minutes “hostage”…. I finally bought a little greeting card reprint and we made our escape.  I liked a number of his other paintings, but I’m not much of an art buyer….. The card I bought was a print of the painting that had been on display outside and had drawn me to the store to begin with.  I just liked the bright colors and happy expression on the bird.  Not sure what I will do with the card…. maybe frame it?  Or just give it it’s very own page in the scrapbook perhaps.

After that, Brian didn’t want me to talk to anyone else for fear we’d get caught up for another 45 minutes.  We headed back to the hotel since we needed to do laundry anyway.  I caught up on my post card and blogging while the laundry ran…. and now it is once again time for bed…. Where do the days go!?