I started making dinner tonight and I realized that I had a whole container of shredded chicken left over from the other night.  I knew that if I didn’t use it up 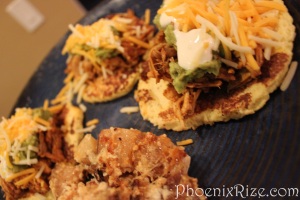 So what to do with the shredded chicken?

Well, I had a head of cauliflower…….  I’d actually been planning to make cheese-sticks when I bought the cauliflower, but then I remembered a recipe I’d found on Pinterest for Cauliflower Tortillas. 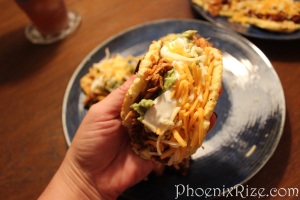 I didn’t bother to look the recipe up again since I’d made it a couple of times and it’s pretty similar to the Cauliflower Pizza Crust.  I grabbed my food processor and got to chopping.  I actually got started early and had a bit of time before Brian was due home, so I didn’t burn my hands trying to squeeze the water out of the cauliflower.  Yay!

This is a really good point to remember…. Let the cauliflower cool a bit before you start squeezing the water out.  Seriously.  It doesn’t seem so bad when you start, but before long your hands will be all red and painful. 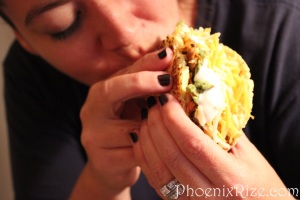 strainer and then dump the cauliflower into the towel.  Now just give it time to quit steaming.  Once it’s cooled down a bit you can start squeezing the water out.  This part takes forever.  You would never imagine that there could be so much water!  It’s really important to get as much water out as possible though.  Also, be sure to wash the towel when you are done.  Don’t wash it with anything else… it will stink up the rest of your laundry.

I probably should have looked the recipe up, because while I remembered the ingredients and most of the steps… I got the steps out of order.  Oops! It turned out okay in the end, and having done it wrong accidently I don’t know if I’d go back to doing it the other way.  I was supposed to have baked the tortillas in the oven first and then “crisped” them in the pan.  I cooked them in the pan and then kept them warm in the oven until they were all done…. oops.

It turned out fine and the reason I probably didn’t notice my mistake is that my cauliflower ‘dough’ is a bit thicker than in the original recipe…. I use a whole head of cauliflower, where the original recipe calls for 3/4 of a head…. what am I supposed to do with 1/4 head of cauliflower?!  They still tasted delicious and were pretty flexible.  Making the dough slightly thinner (less cauliflower or more egg) and them baking them in the oven first and then crisping them in the pan might have made them a bit more flexible, but all in all I was still pleased with them.  Brian didn’t even notice the difference.

Below is my recipe and HERE is the original recipe.

Place drained cauliflower back in bowl and add two eggs, salt and pepper and mix until well combined.

Coat a Cast-Iron pan with olive oil.  Allow the pan to get nice and hot before dropping heaping spoonfuls of the cauliflower mixture onto the pan.  Squish the cauliflower into round “pancakes” and allow to cook for 1-2 minutes on each side. Continue until you’ve cooked all the cauliflower.

Top with your favorite taco ingrediants and enjoy!