We met up with the other MINI’s at the Charlotte Motor Speedway this morning for our second MTTS Rise & Shine event.

Spoiler Alert: I’m going to sound like a complainer through this whole post. Don’t get me wrong… I appreciate everything MINI and the crew do to pull this off. It’s a HUGE undertaking and they do an amazing job… Today just wasn’t my most favorite day.

The event was supposed to start at at 7:30. Brian and I arrived shortly after 7:30…. but there were already hordes of MINI’s that must have gotten there an hour before. The line into the track was backed way up. We ended up getting parked in the second to last row… I swear they must have started parking more cars at the ends of previous rows because I’m sure there were tons more MINI’s behind us.

Look out past the building in the above picture… Under the red ‘Thank You’ sign… That’s all the MINI’s parked together.

Brian and I wandered around the morning event for a bit. MINI had breakfast sandwiches and fresh fruit available today. We bought our Official 2016 MTTS t-shirts and then tried to figure out what the other tents were for. You can see em in the above picture… The row of white tents. One was MINI gear, Defy Hunger (our official charity for 2016), two for the sponsors… Who weren’t even in their tents or doing anything that I could see..  And I have no clue what the other tents were for… There were long lines in front of them, but no clue what was at the end of the line. Last MTTS there were branded tents for the sponsors and they had interesting stuff to sell or give away.

At about 8:30 they told us all to head back to our cars and get ready to take our lap around the track. At 9:30 we were still waiting…. It took forever!

Charlotte Motor Speedway video – it’s a bit slow at first, but it’s a fun view of the track.

All the MINIs finally made their lap of the track and had headed off for the day’s Suprise & Delight. By this time we were so far behind the group that we missed the police escort out of town and there were MINIs swarming everywhere. The rough part is, you never know if the MINIs in front of you are actually going to the next event… Some are going home or skipping the next event… Some are lost… Some are following other groups.  So it’s not a sure bet to just follow the MINI in front of you. Brian chose to ignore the directions from MINI and try to catch up to the main group by taking the highway more. 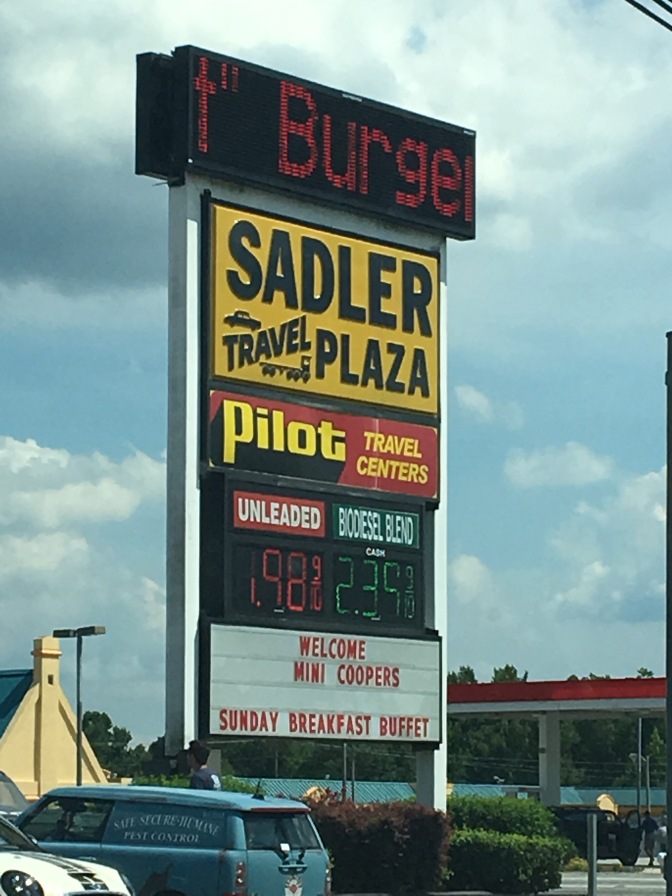 We actually ended up ahead of the main group and got to the Suprise & Delight early. I thought we’d gotten there too early because there didn’t seem to be anything going on. We were finally pointed around the side of the building where the local MINI dealer had set up a tent and was handing out little bottles of water (hot), a state magnet and raffle ticket for the unofficial evening event. Hmmmm…. Okay. I guess I was expecting something a bit more… You know… Surprising or perhaps… Delightful?  We were just at a smelly truck stop… Sadler’s Truck Stop… Which is apparently owned by somebody who was a NASCAR driver…. So, I guess that was supposed to be the connection. 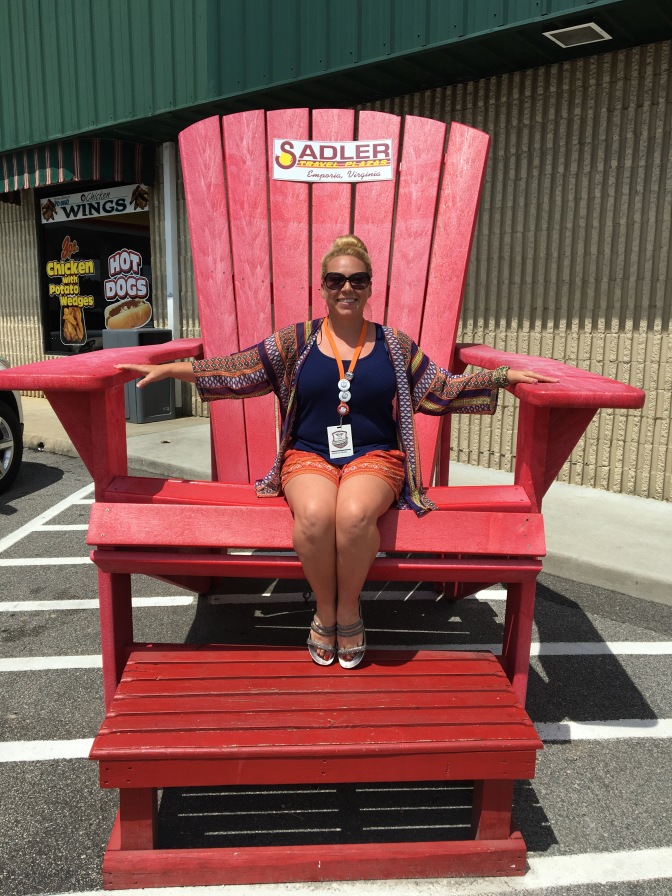 Anyway, I did get my picture taken in this giant chair… And then I slipped backward in the chair and like to never got back out. Damn chair was slick!

We had about an hour more to get to Richmond, Virginia which was our stop for the night. MINI didn’t have anything scheduled for the evening, we were supposed to be on our own to explore. A couple of other groups had planned other events, but the main event seems to be at a Irish Pub. Not really our kind of scene, so Brian and I took off on our own and caught a movie at the local mall. I also needed to find a new pair of tennis shoes.. The new pair that I bought from Amazon just before we left was trying to murder my foot. I’m going to need good shoes when we get to Disney at the end of MTTS. We finally found a nice, comfy, non murderous pair and I can ship the evil ones back to Amazon.

We found dinner at a place called The Daily Kitchen & Bar. There were a ton of GF items on the menu and everything sounded delish! 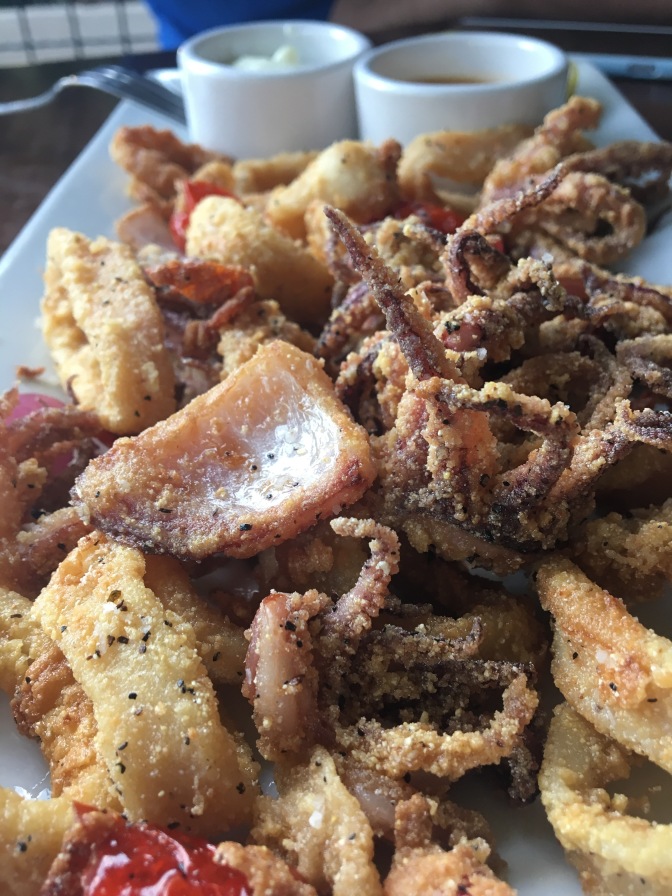 I ordered the GF Calamari appetizer… Brian said he’d share it with me, but I don’t think he likes calamari. I ended up eating most of it.. It was really good. There was an adorable little girl and her mother that were sitting next to us having a really sweet dinner together. This little girl… Probably 9 or so… Was so polite and well spoken. It was hard not to listen in… They were discussing recycling… When our appetizer arrived the little girl asked what it was because it smelled so good.  I told her and offered her a piece… She very politely refused, but I told her that she should try it. She selected a chunk with all the little legs sticking out and remarked that it looked like an octopus. I said it was at the same time her mom said it was squid… Yeah, duh… Squid. Little gal wasn’t fazed a bit. She chomped right into it and seemed to enjoy it. They reminded me of me and my momma.  We always had grown up conversations and fun meals like that together.

After dinner we headed back to the hotel to get a good night sleep before another busy day tomorrow.