Okay, I’m really behind on posting. No good reason for it really…. just nothing terribly exciting. We’re still having a good time on our adventure, but more in the way of ‘Gee, that was nice’ as opposed to ‘OMG!  Wait ’till I post this!’

We went to the Sister Bay Fall Festival one afternoon.  I thought it was a bigger event, but apparently when Brian and I visited last year there were a couple different festivals going on around the county and I’d just squooshed them together in my mind. The one Festival was still fun… just not as big as I’d made it in my head…. so it didn’t take nearly as long to see the crafts and then be done for the day.

Mom and I are getting seriously claustrophobic in that RV so we kinda revolted when Brian wanted to go back after the festival. I pouted until he said we could go look at the damn lighthouses (he didn’t say ‘damn’ outloud, but you could still hear it implied).

Boo was not the least bit impressed by the (damn) lighthouse. Admittedly, it wasn’t the most impressive lighthouse, but it did keep us out and about a lot longer. Of course there wasn’t any parking available near the light house, but Brian had (foolishly) handed me the map of the park and I’d noticed a walking trail from another parking lot through the woods to the light house… it didn’t look like a long trail… it was only like an inch or two on the map!  (1.5 miles.. each way.) 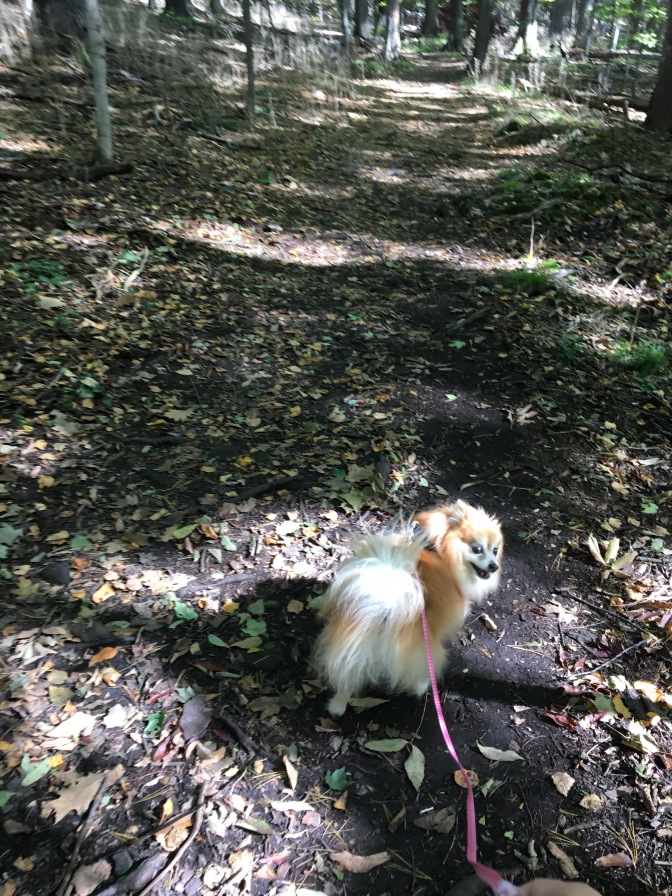 I kept trying to get a cute shot of Boo leading me through the woods… the light was so pretty filtering down through autumn leaves and Boo looked so adorable trotting down the trail. I finally convinced Mom and Brian to keep walking so that Boo would keep walking  so that I could take the picture…. and I promptly got tangled up in her leash, stomped on her paw and rolled my ankle over a tree limb. Boo’d had enough of me and my stupid camera after that and I apologized and carried her the rest of the way back.

The next day was grey and rainy and Mom and I were clawing at the windows…. we don’t do well with confinement. Brian had enough of me and Mom so he told us to go out and entertain ourselves. (You can imagine how well that went over.)

Door County is filled with cute little touristy areas on a peninsula… there’s not a lot of trouble we could get into and since it was a peninsula I probably couldn’t manage to get too lost…. but fine!  We’d go entertain ourselves… hrump!

So we went shopping…. at every antique store on the whole damn peninsula.

I found the deviled egg dish that I’d been hunting….

and the Syrup pitcher!

Grandma used to collect Early American Press Cut glass (EAPC) – Star of David pattern. I loved her collection and I loved that she USED it.  It wasn’t like she collected it and it went on a shelf… she liked it, she’d find it at yard sales and she’d buy pieces for a quarter and use them. I used to borrow her fancier pieces, like the punch bowl and the platters for parties. When she passed I got her collection and I’ve been adding to it slowly. I have these rules for collecting though… I’m not paying crazy Antique Store prices for any piece. Most pieces can be found at yard sales for $.25 – $1.00. Everybody’s grandma had a few pieces so they’re always turning up at yard sales. There are a few ‘rare’ pieces that I’m missing, but I’m not paying $25-$50 for ’em. I’ve had my hands on both the syrup pitcher and the egg dish in the past, but never for less than $25……  I got both of these pieces for less than $20!!! 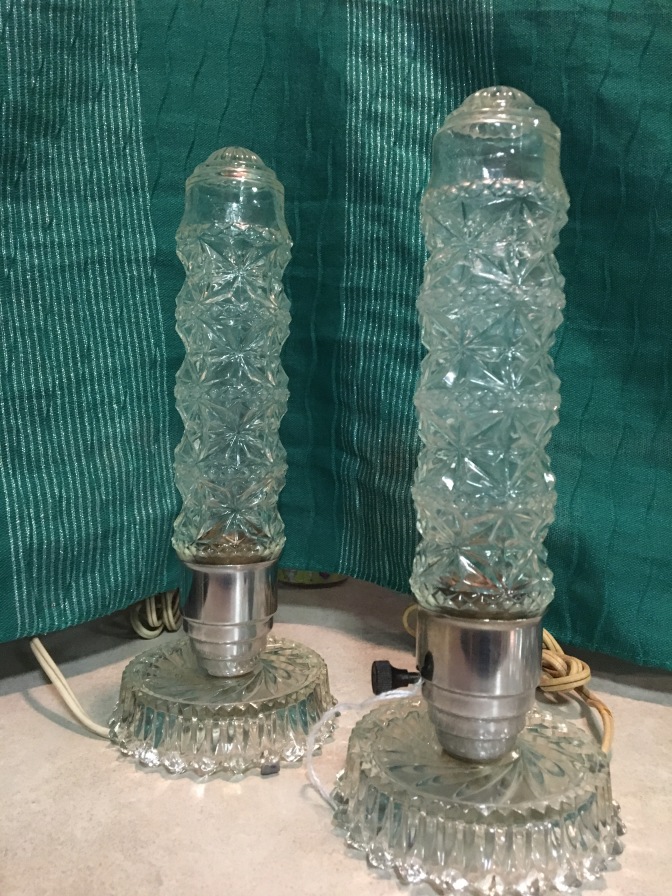 I also found these cool Torpedo (or bullet or boudoir) lamps!  (Don’t say anything dirty about my lamps… I think they’re cool.) I’d never seen anything like them before… and they were on sale!  Brian will have to put new electrical cords on them… one has a wear spot on it that makes me nervous. So shiny!

I still hadn’t had enough retail therapy by that point… and we were still gonna show Brian how much fun we could get into on our own… so we stopped for lunch at the Cookery. Mom and I each ordered a sandwich and then traded half. New discovery!  Cream cheese and cherry jam tastes fabulous on oven roasted turkey slices! (With gluten free bread, of course.) Oh! And applesauce with cherries is equally delicious. It wasn’t that mushy, baby food applesauce… this was thick, chunky, cinnamon-y applesauce with tart cherries. OMG!  I bought a jar of the applesauce to take back and show Brian all the awesomeness that he’d missed out on.

It was still pretty early, even after we’d sat and talked over iced tea and cherry lemonades…. so we decided to just drive around the whole damn peninsula. I checked the gas ‘range’ thingie on the car… I had 130 miles and I figured that’d be plenty… so off we went!

When the gods built me they didn’t waste a lot of internal space (space that could be dedicated to my tummy for stuffing full of all kinds of yummy food) on a silly thing like a bladder…. I’m pretty sure they gave me and extra-extra small bladder. Also, I am part raccoon. (You didn’t know that, did ya?). Well it’s true….. and I can’t eat a meal without a ton of water… or iced tea…. and those two factors (which are completely beyond my control!) have led me to some pretty interesting bathroom stops.

Anyway… so I stopped to pee… again. And as I was wandering around the far side of the gas station (why is the bathroom all the way around the back of the scary gas station?  Are they trying to make it easier for the serial killers?) I noticed a walkway that lead down to a beach. It was blocked off, but I leaned around the Do Not Enter signs and noticed what looked like a public park just a ways down. So… my teeny tiny bladder isn’t all bad. (Have you seen that R/X commercial where this cute bladder is leading this lady to the bathroom all the time and then she gets mad and yells at it… in public… and then takes it to the doctor and gives it drugs. I feel so sorry for that bladder… that lady should be more open to the interesting places that her badder leads her to… also…. she’s hallucinating a giant pink bladder… who’s the one who needs drugs, huh?)

Anyway, so Mom and I found this really cool park with a little…. jetty?  Mini-peninsula? Long hunk of land that led out into the water…. and we walked out and I took pictures while this wicked looking storm rolled in and brought equally wicked looking waves.  And then my fingers froze off because I was trying to get a photo of the water crashing over the rocks… and I got wet… and my fingers froze off. It was a really pretty park…. and we’d have never even noticed it if it weren’t for my ridiculously tiny bladder. Also the park had a bathroom so we stopped there too before we left.  (Someone really needs to monitor my liquid intake.)

By that time it was starting to get dark and we were pretty cold… and all the shops were closing…. so we decided that we’d punished Brian enough… and we headed home. When we got back Brian had made pizza… from scratch…. so we forgave him.

The next day, apparently Brian had  learned his lesson (or perhaps he’d seen the credit card summary…) and decide it was better to go with us.

Mom wanted to take the ferry to Washington Island… so we loaded up in the car… I mentioned that Brian should maybe check the gas before we got too far….. and headed to the ferry.

I’ve been on lots of boats and ferries and I’ve never gotten sick… I love boats!  I don’t generally get car sick (as long as I’m not in the back), but apparently the combination of ‘car on boat’ does make me sick. The ferry had barely left the dock before my stomach started to roll. I opened the sun roof hoping that I just needed air, but that wasn’t nearly enough air. I rolled the window down and leaned my whole head and torso out the window…. for the whole trip. Mom and Brian were fine. Boo was jealous that I got to hang my head out the window and we won’t let her do that. 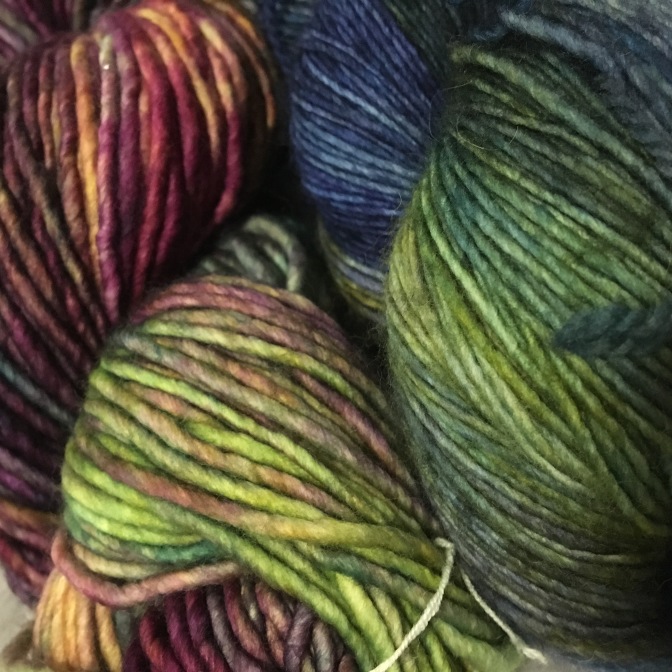 There wasn’t a whole lot to do on the island… it’s a tiny island…. but we stopped at an art school shop that’s sells things that the artist make. I bought this beautiful hand-dyed yarn and a crochet needle. Nope, I don’t know how to crochet, I’m a knitter .. but I’ve decide Mom can teach me. She crocheted… 30 years ago… and I’ve picked out a really complicated pattern… what could go wrong!?

We stopped at this beach that had these cool rounded limestone rocks. It was pretty, but there were signs saying that we couldn’t take the rocks and no dog allowed…. (yeah…. ’cause Boo would have caused all sorts of trouble, but that kid throwing rocks everywhere was fine, huh?) It probably would have been more fun to visit in the summer and play in the water.. as it was, the beach was pretty…

We also visited two lavender farms on the island… mostly because they were there and we thought we should… not because either mom or I actually like lavender.  I had a relative that had issues as a child… and lavender was supposed to be calming. Mom would slather him down with lavender until he smelled like a little French whore…. I wonder if he has flashbacks to those miserable days when he smells lavender?  I can’t stand the smell anymore…. so the lavender farm was pretty, but not the most relaxing stop for us.

Brian made us leave after the lavender farm. He was worried that we’d miss the last boat off the island.

The water was much rougher on the way back. I didn’t even try to stay in the car. I headed straight to the top deck. I nearly froze to death, but I loved the ride back… bumpy and wavy… I just need air and I’m fine. Boo was royally pissed. She was in her puppy pouch, under my coat and wrapped in my scarf. She was not impressed at all.

We caught a couple of farmers markets in Door County before we left. I got this huge bouquet of flowers (dahlias and cabbage roses) for $8.00….OMG! Of course I hadn’t packed a vase so I had to improvise. I sliced the top off a milk jug and stuck a rock at the bottom for weight The flowers lasted quite a while and the cats didn’t even chew off the petals!