Most of us anyway….. more or less.

Brian’s having a bit more trouble with the whole ‘detox’ thing today.  I think partly he’s just being a bit pig-headed and letting himself get hungry.  I also think he’s having a bigger letdown from the sugar than I am.  I’ve been trying to limit my sugar for a while now, so I don’t think I’m having such an issue with detoxing from sugar.

We tried to mix it up a bit at breakfast this morning with unpleasant results.  Brian is of course blaming Pinterest.  I saw a recipe for Pancakes using the Arbonne Vanilla Protein powder and thought they looked… interesting.  The only thing in the recipe that was different from the shakes was the addition of one egg. One egg doesn’t add many calories and then you’ve got all the good things in eggs, so it seemed like a reasonable substitution.  Too bad it didn’t taste so good. 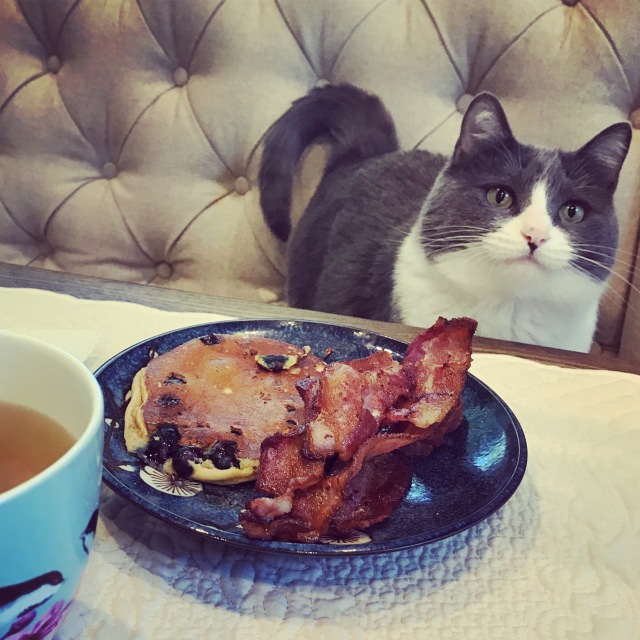 Yep, that’s a side of bacon.  You just hush!

I think it was the sweetener that made them taste so… funky?  The texture was perfect and they cooked just like regular pancakes, but there was this bitter aftertaste.  I think I’m super sensitive to stevia and erythritol.  I’ve added it to other baking in the past and Mom and Brian say they can’t taste it, but I think it’s overwhelming.  So maybe it’s just me.  I’d like to try the pancakes again, but leave out the sweetener next time.  I’ve also seen a recipe for muffins using a similar recipe that I’d like to try with the chocolate protein mix.

The tea is dull, but my Arbonne rep said no to honey, so it’s just going to have to stay dull for the time being.  I may try to find some mint leaves to add to it… I’d just like a bit more flavor.  I think it would be good iced though.

I like the Citrus Fizz Sticks with the Digestion Plus.  It turns an ugly color, but it tastes pretty good over ice.  I’ve been using the Fizz drink for an afternoon snack.  Today I had some cashews and a bit of sausage too.  Since Brian and I split a serving of the pancakes we were both hungry earlier today.

Dinner was awesome, if I do say so myself.  I found a recipe on (where else?) Pinterest that was similar to a recipe I already make… so I tweaked it just little to come up with something in the middle. 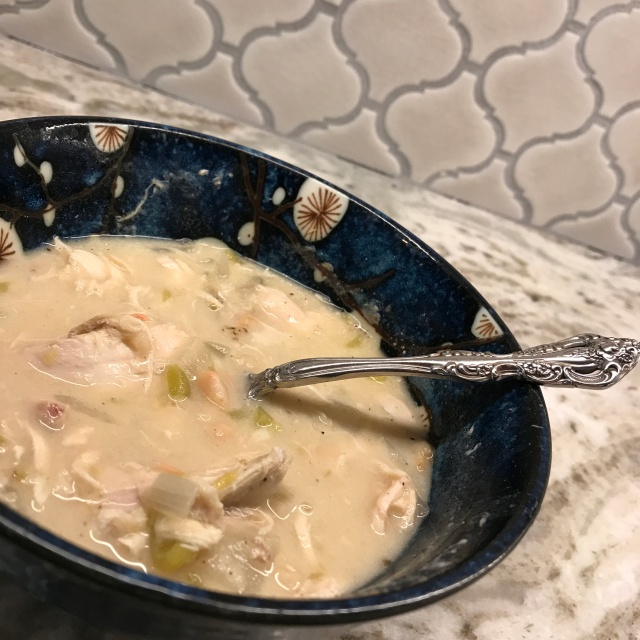 *You can use frozen chicken breasts and just shred them in the pot with a pair of forks once they’re cooked though.

I wasn’t real sure about the whole coconut milk thing.  My original recipe didn’t call for coconut milk, but I have seen other similar recipes use coconut milk…. so… maybe?  I didn’t want to ruin a whole batch if it was gross, so I made the chili without the coconut milk and then added a little to one bowl.  It was actually really good.  Even Mom and Brian liked it. The coconut milk has a light flavor… almost more of a smell than a taste… like Thai food. It works really well with the green chilies, surprisingly.  The coconut milk also adds a slight creaminess to the chili.  Don’t worry that this is going to make the chili sweet… it doesn’t, but it does add another interesting note of flavor.

So three days down… I’m doing okay with this whole detox thing.  I like the Vanilla Protein Shake Mix and the Fizz Sticks.  The tea isn’t exciting, but it certainly isn’t bad. The Fiber Boost and the Digestion Plus can be added to either the shake or the Fizz drink and they are hardly noticeable.  There are enough components to the detox that I feel like I’m doing something, but not so much that it’s overwhelming or confusing like some of the other programs that I’ve tried.

I’ve tried Weight Watchers and it felt like such a chore… I did it before the app came along, so everything had to be looked up and logged by hand.  I found it  time consuming and frustrating.  I liked that it gave me a better understanding of the amount of calories that I’d been consuming, but it still seemed tedious to calculate every Point.  It was also easy to get into the habit of ‘banking’ Points (ie starving) and then blowing all your point on ice cream later.  Not the healthiest meal plan… but technically, I was keeping within my Points.

I’ve also tried Slim Fast…. “Drink these shakes, don’t eat food!” Easy to follow, but boring as hell.  Not a life change… just something to survive until you drop a few pounds, but then gain them back instantly when you eat food again.  (Great business model though.)

I did pretty well on Atkins… it was basically a Gluten Free diet and the High Fat/Low Carb lifestyle mixed.  I wish I’d understood the effect that wheat had on me back then and I’d probably have saved myself years of health issues.

I’m enjoying this detox because it’s giving me some structure and a routine to help get me back on track.  I know I need to lay off the sugar and the carbs… I don’t think my alcohol consumption is so frequent that it’s an issue, but sure… while we’re at it, lets knock that out too.  The dairy… I miss cheese… cheese makes the world better… but maybe that’s just the allergy cravings talking.  Once the 30 days is up I can see keeping up with the shakes for breakfast and occasional lunches.  Hopefully, too, I’ve gotten back in the swing of making healthier meals again.  Living in that RV and traveling really let me go off the rails.