We started day three in Charleston with a fairly long list of must see/do’s to accomplish. I also had a secret shopping list in my head that I didn’t bother to mention to Brian… why worry him, after all. 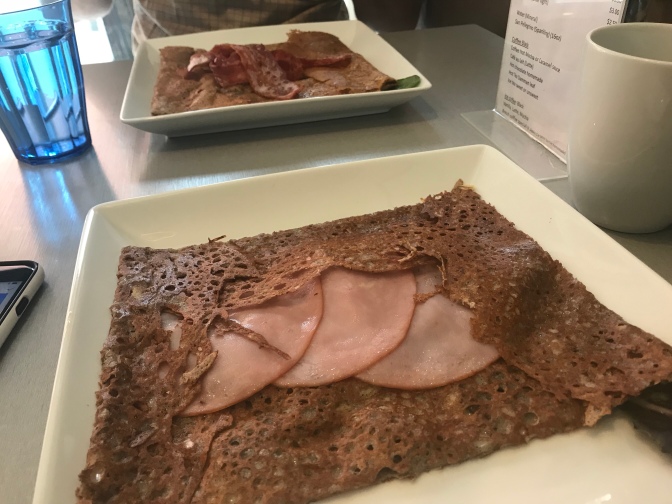 For breakfast I’d been voting on this cute sounding place with cinnamon pancakes, but Brian saw that it was also vegan and he wasn’t having anything to do with fake bacon. Instead we chose Breizh Pan Crepes. It sounded like a great choice since all of their savory crepes are already gluten free and any of their sweet crepes could be made gf easily. (Its such a relief when everything starts out basically gf.)

The crepes were delicious… the restaurant was microscopic. Like… really, really tiny….. 20 seats in the whole place, MAX…. and we were all pretty snuggly. The food was good, but the service was slow. (That’s not an actual complaint. I like sitting around over coffee and chatting…. it’s just a warning not to expect a quick bite and then be back on the road.) While guarding a recently abandoned, dirty table, I commented to one of staff that they were having a busy morning. He said it was like that every day as I sat down and glared at the family of four that had been eyeballing my table for two.

We found a farmer’s market where I knocked one item off the Secret Shopping list…. something for Mom – Plantation Peach Tea. It seemed to be one of those Charleston souvenirs that’s available everywhere until you decide that you should probably get it and then it’s no where to be found.

We had lunch at the Palmetto Cafe. I wasn’t quite hungry yet, but Brian was and I was more than happy to sit in the air conditioning for a bit.

Lunch was crazy expensive. There was a tiny note at the bottom of the menu that said there is a $20 minimum per guest….. we had NO trouble hitting that number.

The Palmetto Cafe is inside one of the fancy downtown Hotels, so I really shouldn’t have been surprised at the prices. Also, Brian picked this one….. I tend to pick weird/eclectic… Brian picks expensive…. or pizza.

Lunch was fabulous. Brian and I both ordered the Seafood Club….. at $30 it was the most expensive club sandwich I’ve ever eaten, but absolutely worth every penny. Three slices of gluten free bread were loaded with smoked salmon, shrimp, crab, tomatoes and cheese. It was insanely good. I will dream about this sandwich.

I also had a drink called a Chantilly…. ’cause it’s hot out…. and because Brian ordered the French fries which were not technically gf because they are cooked in a shared fryer….. and I needed a ‘side’ too. (Don’t laugh, my reasoning is perfectly valid!)

After lunch we visited the Charleston City Market. It is a series of several long, mostly open air building that go on for several blocks. Vendors line either side of the building with a walkway down the center for shoppers to shuffle along.

It’s not quite what I’d expected. I’d been expecting something more along the lines of the City Market in New Orleans…. admittedly though…. I’m probably still pining for the New Orleans Market from 15 – 20 years ago….. everything feels so commercial and mass produced anymore. I miss the actual hand crafted, one of a kind stuff that you used to be able to find. Many of the paintings and artwork are reprints. And the jewelry looks like the same stuff you get at just about any other market. (Great, now I feel old and jaded.)

The one thing that did interest me were the sweet grass baskets and roses that vendors were making. I’d been thinking about getting one for Mom, but even the small ones were $40-50. Brian pointed out she couldn’t fit a cat in one of those and a cat sized basket was a few hundred. The baskets were beautiful and I’m not doubting the price/value…. I’m just saying that the first time I saw Vickie (the cat) gnaw on a $200 basket I might have a coronary. It was better for everyone that I just got Mom tea.

We took a carriage ride through the city and learned tons about the city, the architecture and our horse, Gary. 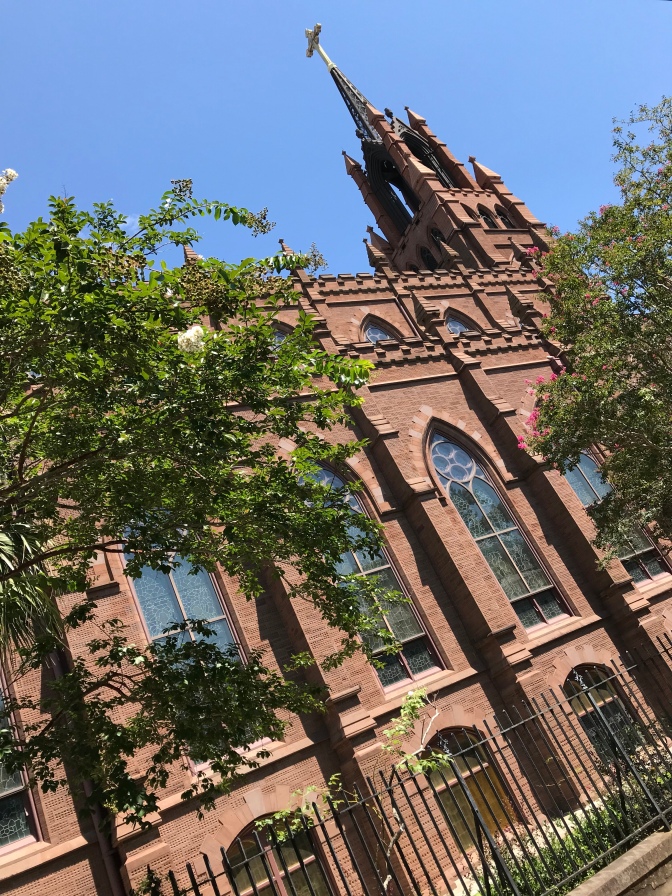 For dinner we were just looking for something easy and casual. Once again Charleston had left us both sweaty, tired and not pretty enough for fine dining.

Taco Boy got good reviews on the Find Me Gluten Free app and tacos are always good.

The restaurant was noisy, but our waitress was great. She said we’d be safe with anything that wasn’t fried and just to choose corn tortillas instead of flour. There were several different kinds of tacos to choose from and only a few had anything fried in them that we had to avoid. Brian and I each chose three tacos and loved every bite of them all. 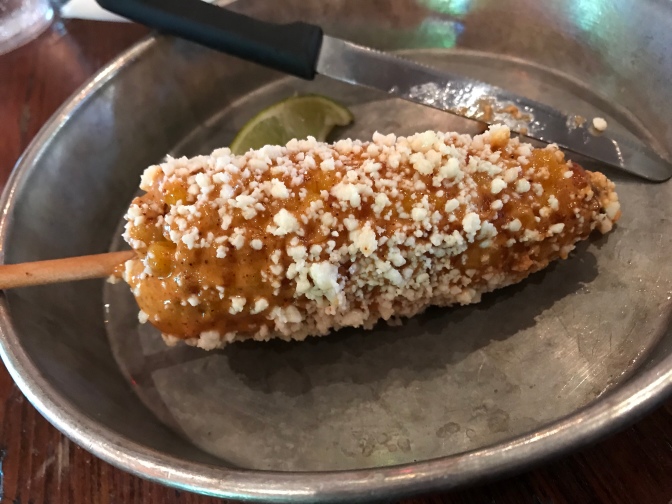 We also ordered a starter of Mexican Street Corn that was crazy good! I’m going to have to find the recipe. Normally I am NOT a fan of corn on the cob…. I pretty much hate it. (Why eat food that is just going to get stuck in your teeth and make you insane when you can buy it already sliced and in a can?!?) By some strange coincidence I’ve gotten corn of the cob twice this weekend and suddenly I’ve decide I love it. Yep, I’m weird like that.

We found the pretty houses on Rainbow Row. They’re pretty and all….. but they look a lot better on the postcards. 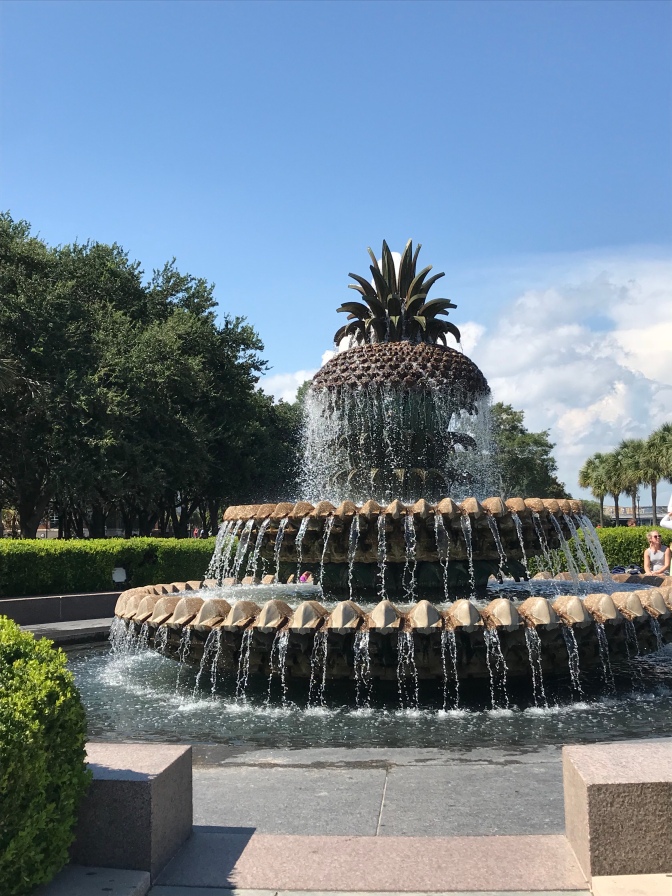 We also found the Pineapple Fountain in Waterfront Park.

We had a wonderful time in Charleston and we’ll definitely be back!