Last weekend I hosted my cousin’s bridal shower.  Finally.  I’ve been plotting this party since she got engaged two years ago.  Two years?!  I’m not the patient one, obviously.  Brian was really relieved to have the party over as well.  I’ve been buying and storing party items in our basement for over a year now.  The day after the party we cleaned the basement and packed away all the party decorations.  Who knew there was a floor in the basement?!  Brian.  He kept reminding me that there was, in fact, a floor in the basement, but it hadn’t been spotted in several months.

As usual, I had over bought the food.  CostCo freaks me out…. I get panicky about halfway through, as things start to spew out the top of the cart.  I start trying to calculate how much I’m about to spend…. and then I see the giant tub of peanut butter… and, yes, I add two tubs of peanut better to my cart…..’cause I’m sure I need that much peanut butter.  Yeah.  It just all seems like a good idea at the time.  Okay, it’s not entirely my fault.  Not everyone RSVP’d on time.  (Can you guess my biggest pet peeve?  Yeah, people who don’t RSVP!)   So I was kind of guesstimating the number of guest.  (People who don’t RSVP should be left outside to starve and watch the party through the window.  But of course, a good hostess wouldn’t do that…. so I always over-buy on food.)

Since I had leftovers, I decided to try to use everything up at Family Dinner Night.  Chicken Cordon Bleu Casserole would use up the last of the sliced turkey, ham and swiss cheese from the Dollar Roll Sandwiches.  Normally I only use ham in the casserole, but since I had the turkey, I went a head and used it up.  No complaints from the family, but it didn’t make a big difference, so I wouldn’t bother doing it again.  I was just using up what I had.

I was also able to use up the rest of the lettuce in another salad (because you can’t buy 2 romaine hearts at CostCo, you have to buy SIX) and I chopped up the remaining chocolate clusters and tossed them into some homemade ice cream.  The very last of the leftovers went into lunches for the rest of the week.  Yay!

All in all, the party was a hit, but I am happy to have it safely and happily behind me and the leftovers out of my fridge no longer tempting me. 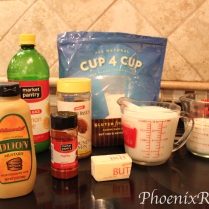 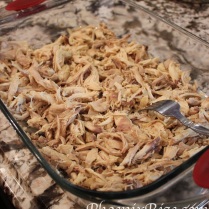 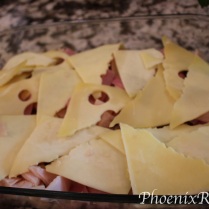 Layer the shredded chicken in the bottom of the pan, followed by the ham.   Finally, layer the swiss cheese on top.

In a medium saucepan, melt the butter over medium heat.  Whisk in the Cup4Cup flour to form a rue.  Allow rue to begin to bubble, but not brown.  Slowly add the milk until smooth.  Continue whisking as the sauce bubbles and thickens.  Remove from the heat and add the lemon juice, mustard and spices.  Pour the finished sauce over the base layer.

Melt the butter in a small bowl then add the crushed cornflakes.  Toss the cornflakes in the butter until completely coated.   Sprinkle over the top of the dish and bake for 45 minutes.