Oh! Why does morning come so early?! I’m starting to wear down on this early morning thing.

Brian and I grabbed a quick breakfast at the hotel… Literally… I grabbed a banana and chased him out the door. I think I’d been moving a bit to slow this morning and he was ready to go. 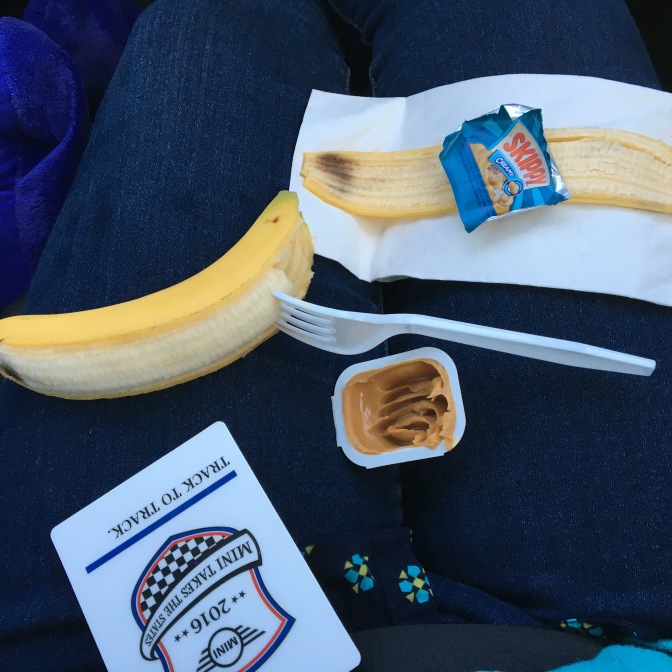 I ate my banana and peanut butter in the car on the way to the M1 Concourse.

It was a bit chilly this morning… a little over cast and breezy… I was happy that I remembered a sweater. I was extra happy that this morning’s caterers had big pots of good, hot coffee. 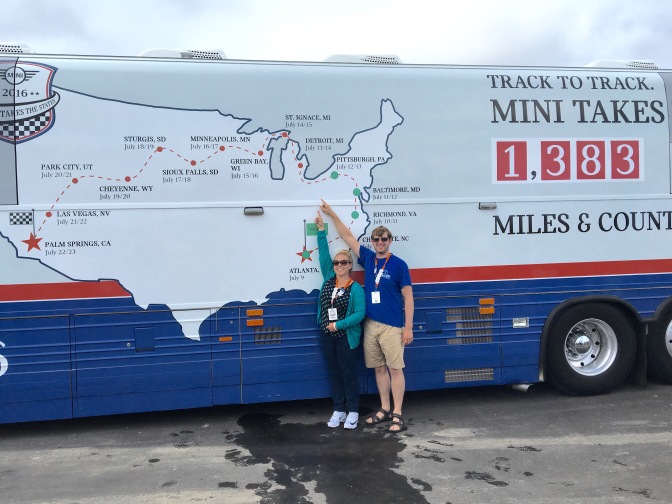 MINI of Detroit, our host dealership for this leg, gave us all drawstring MINI backpacks as we came in today. It’ll be perfect for on the beach!

MINI, the dealers and sponsors have been treating us to some great (as MINI calls it) swag. I want all the presents, but then I remember that I’m gonna have to pack all this stuff in a few months… Maybe I shouldn’t be cranky that Brian and I had to share the straw at the last event…. 😒

They had a nicer bathroom trailer this morning too…  There were four bathrooms on the ladies side and three on the boy’s side. There still could have been more bathrooms, there could always  be more bathrooms… but these are pretty nice. They’re the rv style toilets, but there’s real running water and air conditioning (not that we needed it today) and sinks. These things are cool!

The M1 Concourse is a new track… More like a country club for race cars than a NASCAR or rallye track. Some places of the facility still seem to be under construction.  The track is complete though, so we got to take a ‘parade’ lap. Emphasis on parade… As in SLOW. No passing, no driving on the grass (which is still mostly mud) and nothing over 20 miles an hour.

Actually, since we were released from the event right off the track there really wasn’t any chance of us going any faster than 5-6 mph. As soon as we exited the track we had to deal with stop lights and other traffic…. like normal mortals… So we got all backed up on the track.

The afternoon Surprise & Delight wasn’t a surprise… The shop owner that was hosting us has been posting on the events FB page for a week with updates and suggestions about the area (like good bathroom stops and restaurants to visit) but it was a total Delight!  The Gourmet Cupcake Shoppe was awesome!  This gal was totally on top of the whole event. I heard that she even attended the event in Ohio just so she’d have a better grasp of what to expect when we showed up. They did a great job! They must have baked though the night.. There were over 5000 cupcakes ready for us today. They gave everyone a free mini cupcake and they had regular cupcakes and MINI frosted cookies available for sale. They had an iced tea area…. They thought of everything. Brian and I bought four of the Gluten Free cupcakes and they were fantastic. I actually started eating mine and kinda freaked out.  It tasted like a real cupcake… I couldn’t believe it was gf. I figured I’d already eaten half of it… If it wasn’t gf I was going to be sick anyway so I ate it all.  Apparently it was just the most amazing gf cupcake ever!  I ate the whole thing and felt perfectly fine.  I have two more to eat later! (I should probably share one of them with Brian though….)

The route MINI suggested for the rest of the trip took us past cherry orchards, farmers markets and Michigan beaches. A really pretty route. A number of streets were lined with flowers… Marigolds and petunias… Really, really pretty!

By the time we arrived in Mackinaw City, MI it had started to rain. We’d been considering taking the ferry over to Mackinaw Island, but since it was raining and chilly we decided to make an early night of it. This was a scheduled On You Own evening anyway.

Brian and I found a pizza place close to our hotel that got really good reviews for gf pizza. We ordered at the counter and we’re looking for a place to sit when two other MINI people called out that we could join them. It was a really funny coincidence that we ran into these two. Both of our dinner companions were MINI execs (it’s cool that MINI execs get out at these events and actually mingle with their coustomers and get to known ‘their people’!) One of the guys was at the Cupcake event this afternoon holding the door and directing people. Brian and I were in the little crowd that was waiting near the door and he was telling us new directions around a construction zone. Someone was teasing him that they’d come find him if the directions took them somewhere crazy. He laughed and said that there wasn’t an evening event tonight alway, so he was safe. And here we randomly meet him at dinner! Probably six people were standing at that door when he said that… And here we were! MINI Serendipity!

It was fun getting to talk to insiders about the event and the MINIs. We didn’t manage to squeeze any secrets out of them, but it was fun hearing their perspective of the events and some of the inner workings. And it was nice being asked our honest opinions and thoughts.

The pizza was awesome and the conversation fun. After dinner Brian and I wandered around the shops for a little while and then headed back to the hotel for an early night. These early mornings are getting to me.