A few weeks ago I noticed the sign for Taziki’s Mediterranean Cafe and immediately googled the menu.  Jackpot!  Right on the front page of the menu it said that most items either were, or could be Gluten Free.

I’ve been trying to drag Mom and Brian there, but they kept making faces at me.  I like really Greek food… the more olives, grape leaves, lamb and feta that you can throw at a dish the better.  Mom and Brian aren’t quite into it that much, so I had to keep giving them the menu and whining to get them to go.

It’s a good thing it took me several tries to get them to go since apparently Taziki’s didn’t open until that very day.  We missed the grand opening event by an hour, but they were still quite busy.  The owner, John, came over to greet us and chat about the menu.  I told him that we were excited to see so many Gluten Free options on the menu.  (I like to make tell the owners/staff/chefs how much I appreciate the GF options.  I know it can be more work to keep things safe for us GF people and I like to make sure they know how much it is appreciated… and that it affects our decision to choose a restaurant.)

John was super sweet and knowledgable about the menu.  He mentioned a lemon chicken soup and since Brian was working on a cold I asked if that one was GF.  He thought for a moment and then replied that no, it wasn’t because the stock had wheat.  I was impressed that he knew.  Later when he visited our table to check on us he told us that everyone who works at the cafe has to take tests on all the menu items and has to know what is in everything.  Nice.

I ordered the Taziki’s Feast without the skordalia sauce, since it isn’t GF. 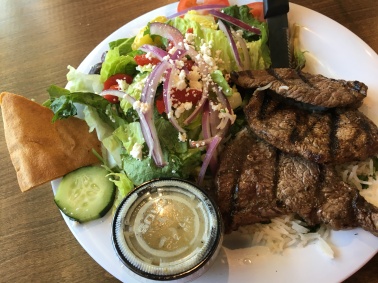 It was fabulous! I really liked the salad too.  Could have used more olives, but that could just be me and my olive obsession.

You’ll notice the Pita triangle on the edge of my plate.  Not Gluten Free.   I mentioned it to John when he stopped by to check up on us.  I said it would be nice if they had a button or something to denote Gluten Free orders to prevent cross contamination.  He was very apologetic and said they did have a GF button (or something similar) and that the kitchen should have known better.  They’d only been open a few hours, and it was crazy busy.  I was impressed with how well they did with our orders as it was, so I didn’t really want to complain… just point it out.  It was obvious and I was able to remove it and just avoid that area of the salad.

Mom and Brian really enjoyed their lunches too.  Brian had salmon, Mom had shrimp and I stole nibbles from both.  I think I’ll order the shrimp next time.  It was quite tasty with the lemon and butter.

All in all I’m pretty excited about the new restaurant.  They’re impressive with they’re understanding of the menu and all the ingredients.  The Pita Triangle guy needs a bit of work, but it was the first two hours, so….  The food was delicious, fresh and bright and the restaurant is pretty and spacious.  I’m looking forward to going back soon.  Mom and Brian even agree… I win again!