I posted something on Instagram a while back… I don’t remember what, but I do post a lot of food pics (food, Jamberry, seashells and my Pomeranian!) and I received a notification that Flava Moose liked my photo.

Flava Moose?  Oh, I had to see who was this Flava Moose.

Flava Moose is just the yummiest, most overwhelming and awesome ice cream shop in the universe!  (And I’ve made it my mission to check them all out!) Flava Moose may just be my favorite though.

Why?  Well, to start with, the combinations are endless!

You begin by choosing a size… a Small is still three scoops…. just sayin’….

Then you choose whether you want Ice Cream, Gelato or Ice.

Next you you have to pick a Milk…. Soy, Cashew, Almond, Coconut, 2% Lactade, Whole or Greek Yogurt. (I’d vote for whole milk, but if you have a dairy issue, they’ve got you covered!)

Nope, not done yet…. What kind of sugar do you want to use?  Splenda, Honey, Regular Sugar, Maple Sugar or Stevia?

How about a waffle bowl?  Or would you like you ice cream in a crepe?  They’re made fresh as you watch.

Gluten Free so I couldn’t have the waffle bowl….the delicious smell was torture! and he said that they’d been considering adding GF waffles and crepes.  Eeeeep! Of course I squealed and promised that I’d come in and taste test for them! One in each flavor should do it, right?)

No no, we’re not done… I got side-tracked with the whole GF waffle bowl thing….. NOW…. pick a flavor.  Your brain may just possibly explode from the sheer possibilities of deliciousness. 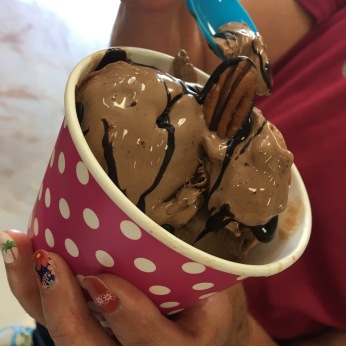 Brian chooses chocolate every time.  He says he’s a purist.  (whatever)  Mom is working her way through the fruit flavors and I’m bouncing around the menu.  Blackberry & Raspberry was delicious!  So was Lavender & Raspberry….. (I’m on a raspberry kick lately.) I’m thinking I want to try the chai next time… or maybe the rose?  There are also veggie flavors to choose from.. carrot, broccoli, aloe, corn…. I’m not sure about those…. they sound too healthy.

Okay, but that’s just the ingredients… now lets talk about how it’s made!  Each order is made individually… that’s how you can have so many combinations.  They first blend the base flavor and the milk then the concoction is poured over a -40° pan.  Using two scraper/spatulas they scrape and smooth and blend the ice cream mixture until it is just the smoothest, creamiest and dreamiest.

Of course you can add toppings and sauces, but I don’t usually choose to add any. I think I heard that there were over 18 different toppings.

It’s not a super fast process, but it is fun to watch.  We took our out-of-town-friends to try Flava Moose last week.  It was our last stop on the two-day “See Where We Live Now” tour and we were all getting kind of tired from running around.  It was nice to stop and let the ice cream be the entertainment for a bit.  The Flava Moose crew mixed our ice creams and chatted with us as one at a time we each received our chosen creations.  We’d all grab a spoon and sample each other’s and oooh and ahh.  Then the next ice cream mix was being drizzled on the -40° pan and the scraping, smearing and squooshing show would begin again.  It would probably make a great first date stop.  The shop is only two blocks from the beach… after you got your ice cream you could walk to the beach to eat it…. yeah… ice cream and a walk on the beach… totally romantic!  (Yes, my idea of romance does include ice cream…. duh.)

Every time you leave the Flava Moose crew hollers “Bye, see you tomorrow!” and I think ‘thank, goodness I don’t live closer or, yeah… I would back tomorrow.  Blast you, Moosie!’